What is Cleft Palate and Lip?

Cleft lip and cleft palate are birth defects that occur when a baby’s lip or mouth do not form properly during pregnancy, while the baby is developing inside the mother. Clefting results when there is not enough tissue in the mouth or lip area, and the tissue that is available does not join together properly. 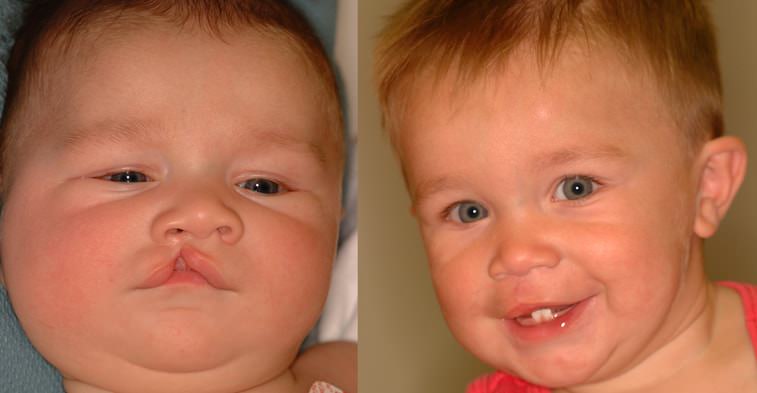 Symptoms of Cleft Palate and Lip

In most cases, the split in the lip that is characteristic of a cleft is the most noticeable sign of the defect. Milk may come out of your baby’s nose while feeding because the barrier between the mouth and nose is abnormal. It’s also possible for children with a cleft to have dental problems, such as missing teeth or having extra teeth.

A cleft palate can also trigger frequent middle ear infections and problems with your child’s Eustachian tubes. These tubes help to drain fluid out of the ears and are responsible for making sure that the amount of pressure is equal on both sides of your eardrum. If your child has problems with ear infections and their Eustachian tubes don’t drain properly, hearing loss can result.

Diagnosis of Cleft Palate and Lip

It’s possible for cleft palate and lip to be diagnosed while your baby is still in the womb through the use of an ultrasound. An ultrasound uses high frequency sound waves to create an image of your baby inside your abdomen.

If your doctor discovers that your baby has a cleft palate or lip while in the womb, they may want to remove some of the amniotic fluid that surrounds your baby to have it tested for other genetic abnormalities, such as van der Woude syndrome.

Treatment of Cleft Palate and Lip

The treatment for your child’s cleft palate or lip will depend on the severity of the condition. Treatment often involves several surgeries to close the opening and reconstruct the face.

A team of specialists may work with you and your child. For example, if your child has problems with speech because of their cleft, they might work with a speech pathologist. Your child’s team may also include a plastic surgeon, an oral surgeon, and/or an orthodontist.

It’s recommended that you get your baby’s cleft lip repaired when they’re between 10 weeks and 1 year old. If your child has a particularly wide cleft, your child’s doctor may want to do a lip adhesion that involves sewing the cleft together temporarily until a surgeon performs the repair. During surgery, your child will be put under anesthesia and a surgeon will use tissue and skin from both sides of the cleft lip to make the lip wider and close the gap.

Doctors usually perform surgery to repair a cleft palate when a child is between 6 and 18 months old. During surgery, the muscles and tissue on the two sides of the palate are connected together to close the cleft.

Surgery to repair a cleft palate or lip is ideally performed in your child’s first year. However, additional reconstructive surgeries may be required well into your child’s teenage years.

Causes of Cleft Palate and Lip

The cause of cleft palate and lip isn’t known, but doctors believe that the defects occur because of both genetic and environmental factors. Genetics can play a role in the development of clefts if one or both parents pass down a gene that makes a cleft palate or lip more likely.

What you do during your pregnancy can also increase the likelihood that your child will have a cleft palate or lip. Factors that scientists believe may cause a cleft to develop include:

A cleft can occur as an isolated birth defect or as part of a larger genetic syndrome, such as van der Woude syndrome or velocardiofacial syndrome, which are both genetic malformation disorders.

Coping with Your Child’s Birth Defect
Ask your child’s treatment team about support groups in your area for families of children with birth defects. Communicate openly with your child and help to build their self-esteem by letting them know that they are not defined by their defect.